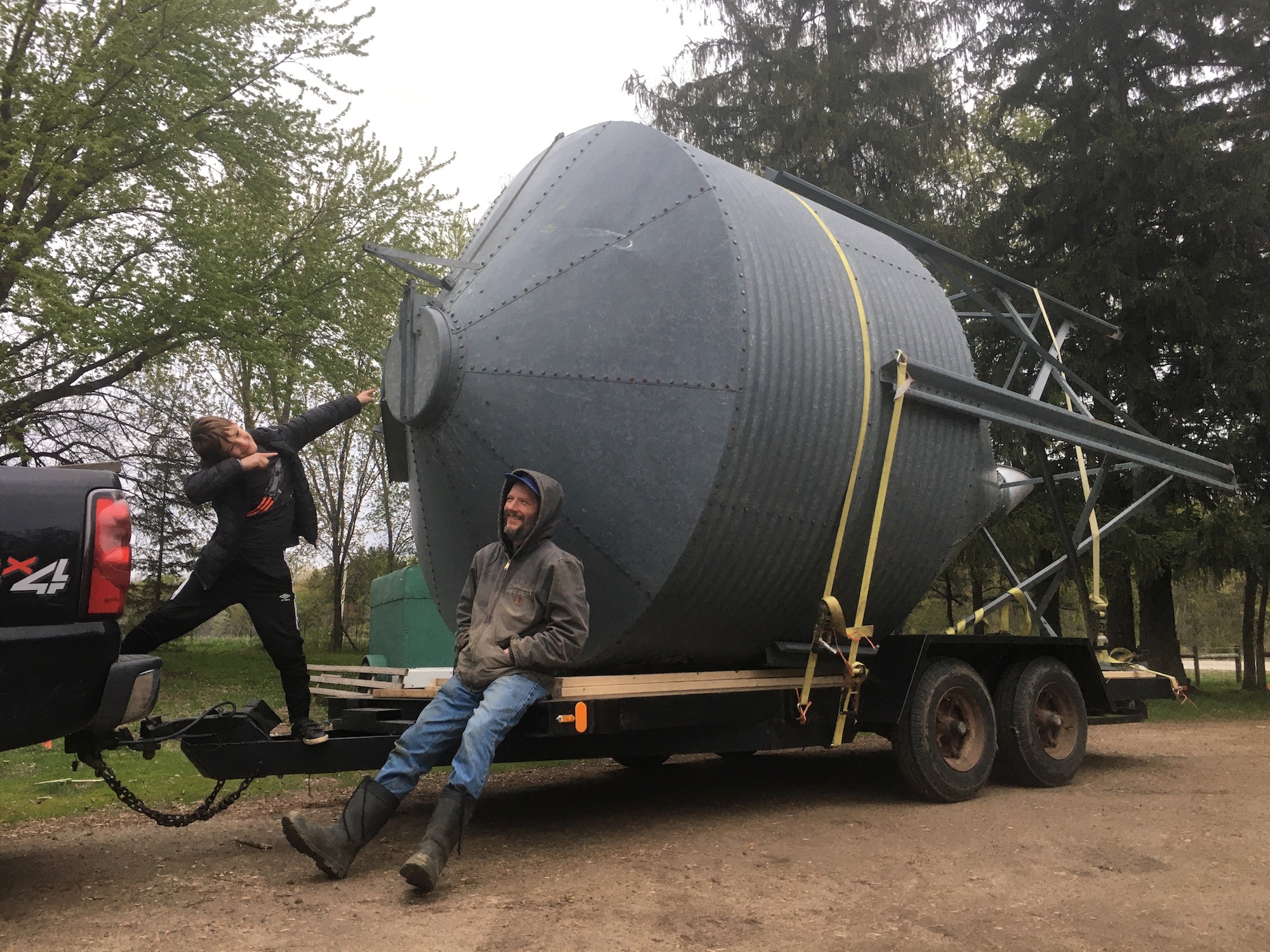 My children’s grandmothers used to lament that we rarely took our kids to museums or movies because farming always keeps us so busy. What the grandmas don’t understand is that farming offers all of the excitement of movies and museums. Even better, all of that excitement is huge and tactile and sometimes threatens to roll over us if we don’t stay alert and ready to run out of the way.

For example, we bought four used feed bins this summer. Beneath that dull statement lies a whole season of passion and drama. My husband’s hopes rose or fell as he discovered potential candidates on Craigslist. A couple of good ones got away, and he banged his hand down on the table. Other bins looked like a perfect match online but had horrible flaws when seen in person. Finding the right bins took on the tenor of online dating.

In the next step of the search, my husband and our nine-year-old traversed southern Minnesota and northern Iowa to visit people who were selling bins. Each trip yielded a story. Once they saw a burning barn at the farm next door to their destination. They asked the farmer who was selling a bin if it was an expected thing that his neighbor’s barn was on fire. That man immediately called 911, and the three of them drove to the blaze. They were the only ones on the scene until firefighters finally arrived to douse the flames, which amazingly never moved to the house or the nearby vehicles. In the midst of all this commotion, the owner of the burning building arrived to join the spectators genially, with no visible sign of concern or surprise. When order was restored, my people went back to pick up the feed bin, after the farmers served them an unexpected picnic of hamburgers and pecan pie. Museums can’t top that.

When the feed bin arrived at our home, enormous and strapped on a trailer, we had to figure out how to unload it. We worked after dark. My husband and 16-year-old invented make-shift ramps for the bin to slide down as I held a strap to keep the bin from rolling down and crushing them as they worked. Wind made the strap vibrate in my hands, and the huge starry sky made me feel small.

I held on for dear life at first, but as the job became longer and nobody seemed in imminent danger of being smashed by a ton of metal, I started to daydream. I remembered my grandpa, who grew up on a farm and would have been in his element here. He would be bending down by the trailer with my husband and son, moving boards around and figuring out this puzzle. My husband’s dear friend Chuck, who accompanied us through many farming adventures, was there in spirit with us too.

After several false starts that ended with shouts, the feed bin was finally lying on the ground and nobody was crushed by it. We decided that we would build a support structure to help unload the next feed bin. One day, I came home from errands to find what looked like homemade gallows standing near our garage. That structure proved useful when another bin had to be unloaded.

Now the feed bins are all purchased and installed, and an era has ended.

I have no doubt that more adventures and challenges will come our way soon. That’s the nature of farming.