Let’s talk about the “No Hormone” and “No Steroid” labels. Most consumers don’t want artificial drugs in their food and look for labels like “raised without added hormones or steroids” - but are you getting anything for that premium?

Why would a farmer use hormones or steroids?

When we started our hobby farm, our neighbor had a small beef feedlot. Although we held pretty opposite views on farming, we had a good relationship and learned a lot from each other.

One thing I learned from him is that their farm made about $25 extra per steer when using a synthetic estrogen implant. That $25 is a big deal for a farmer. But for us as consumers, we’re saving less than 3 cents per pound by eating meat fed chemicals implicated in causing cancer.

Beef or lamb is possibly worth seeking out a “no hormones, no steroids” label, but there is a catch.

If you’re buying in the grocery or even online, that almost always = big agriculture. The big companies know consumers want to avoid hormones and steroids, so they have developed other widely used classes of growth drugs. For example: until recently, A large percentage of chicken and too much pork and turkey was given a feed-additive growth drug made from highly toxic arsenic, which lingers in the meat AND notably increased arsenic poisoning in humans.

For 70 years, the pharmaceutical industry told us that drug was safe. However, once the arsenic-tainted meat became public knowledge, they quickly agreed to stop selling it. They then lobbied the government to minimize the warnings on the public advisories. Somehow convincing the FDA to remove words like "Arsenic" and "Cautionary" in a press release and to tone down the language on the FAQ page around the dangers of arsenic laced feed.

Who knows what has replaced those drugs?

The original data that triggered the investigation was from Minnesota

The chart below shows a 2006 Minnesota study that was used to begin the lobbying efforts to remove arsenic based feed. The sample sizes used were small, just 5 samples per entry. The presence of arsenic doesn't necessarily mean those brands added arsenic to the feed at the time, if anything after researching more detailed studies, it seems to show the Kadejan didn't feed these birds arsenic, but just had high levels in their water or contamination in their conventional feed. 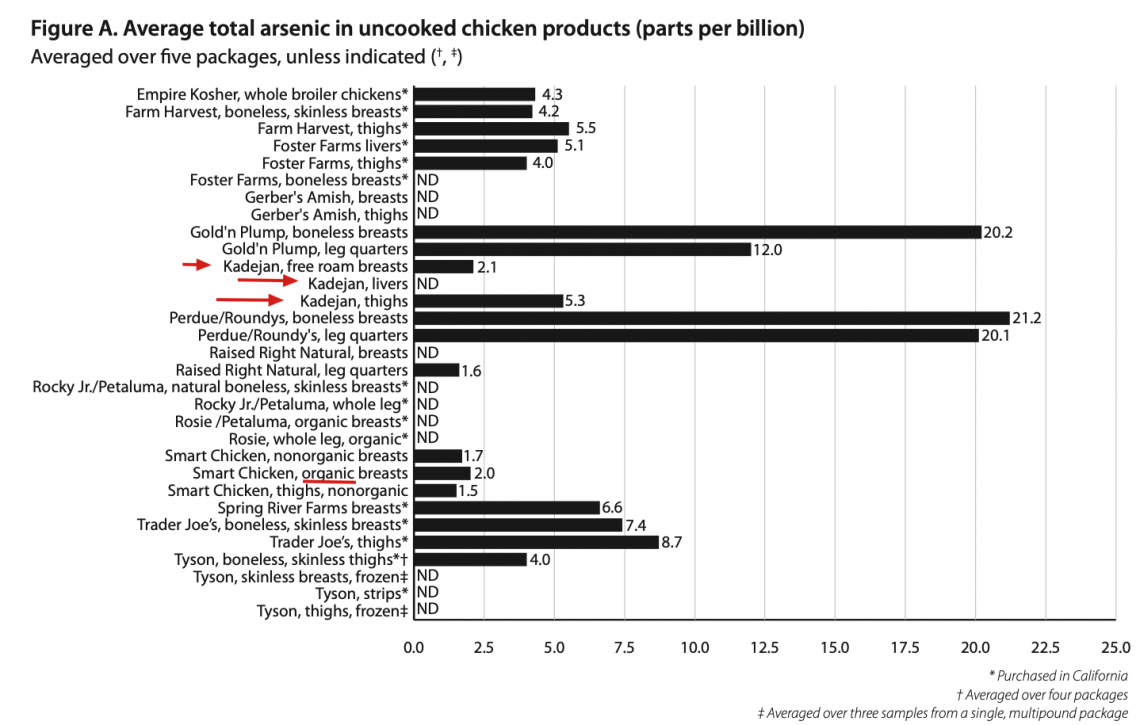 What about pork, beef and turkey?

For pork, beef, and turkey, the main growth drug is called ractopamine. It’s a beta-adrenergic drug. It acts on the body like adrenaline (which you don’t want to be eating). Meat with drugs like this are labeled as “hormone and steroid free”. Developed in Minnesota, ractopamine is banned in almost every other country due to health concerns.

Unless that meat is certified organic or from a farm which explicitly bans any growth drugs (like us), you need to assume the meat contains some sort of growth drug. Even natural food stores generally allow the use of ractopamine and other growth drugs. I’ve done my homework and personally called several brands sold in the local co-ops; they also allow the use of this growth drug in their products (especially in deli meats). The tide is just starting to turn on this specific drug, but you can be sure a new unlabeled “not hormone or steroid” drug is already in the works.