Adding up the costs

A new study in the Journal of Clinical Endocrinology and Metabolism (JCEM) has attempted to put a price tag on the hidden cost of something we've been talking about for years: The chemicals too often used in meat packaging, specifically PVC and phthalates, are part of a category of things called endocrine disrupting chemicals (EDCs). These have been linked to serious health problems. This study took a look at the best other studies out there and tried to tally up just how much EDCs might cost in terms of health care and other costs. (They focused their study on the EU since that's where most of the best studies to date have been done but those same chemicals are used here, too.)  The number they came up with?  Nearly $1.6 billion per year(!) And that was a conservative estimate, focusing on two of the diseases which have been strongly linked to these chemicals... and they just tallied the costs for the EU.

Phthalates are normally used to soften hard plastic so it can form around meats or cheeses really well. This includes many shrink wraps and things like ground beef packaging.

The big problem is: phthalates are fat soluble. When they are used in meat packaging, they can actually leach out of the plastic and into the meat itself. Studies have consistently found phthalates in the urine of people across all age groups.  (If you do read the linked CDC study, start on page 354 for tables about phthalates.)

Phthalates are also used as a pesticide where they have been shown to cause reproductive malformations in animal tests and six(!) studies show exposure in humans is associated with autistic-like child behavior... one more good reason to avoid eating ANY conventional products.

Where won't you find them? 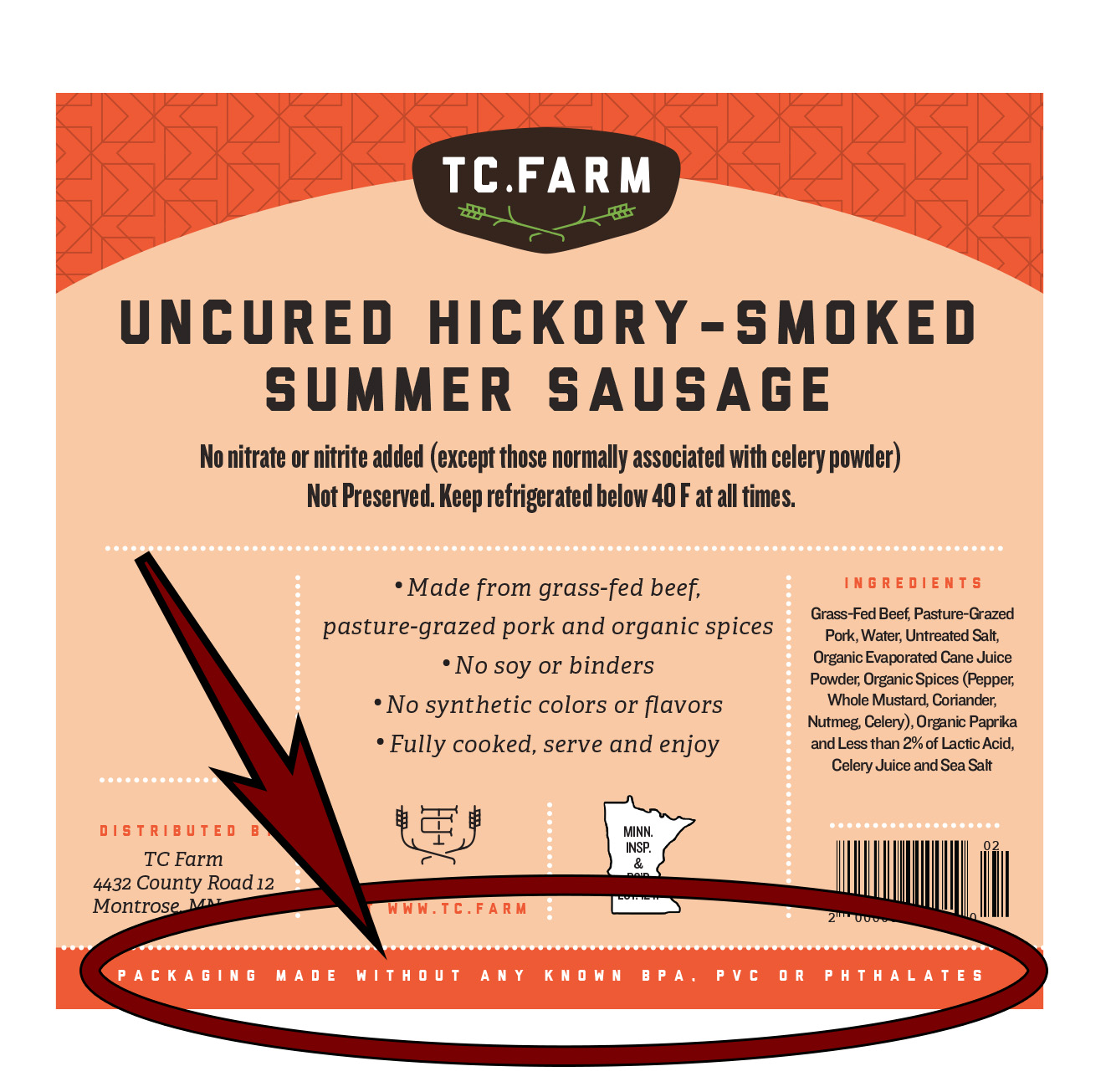 First and most importantly: they are NOT in your TC Farm packaging.  Have you noticed this little notice on the bottom of your TC Farm food labels?

You probably already know that we're very focused on raising the cleanest food possible, but you may not have realized that our obsession for 'no shortcuts' extended to researching the type of packaging used in our products.  We wanted to make sure they didn't have harmful additives like PVC, phthalates or BP-A (or BP-anything).

Why are they used?

Unlike TC Farm, where we dry age our beef, most beef is 'wet' aged. This means it is packaged right after the cow is slaughtered. This modern technique can make beef seem cheaper because it causes about 10% extra water to stay in the beef... By comparison, that beef is basically watered down and appears cheaper as a result. Studies say this beef also tastes worse, but less expensive sure is a good marketing strategy!

The problem with this process is that wet aged beef is purple. Nobody seems to want to buy purple ground beef. It can be stored on a pallet in some refrigerated warehouse for longer than you care to know. Just sitting there all purple and gross. This saves money because it helps increase how long 'fresh' meat can be stored before it goes bad. It is also 'efficient' because it can be shipped all over the world from a centralized factory.

At some point before they want to sell it, the entire pallet is flushed with carbon monoxide. This permeates the PVC/phthalate plastic wrapping and causes the hemoglobin cells to burst -- turning the purple beef into a nice appetizing red color, and it will stay that color for quite a long time, long after the meat actually goes 'bad'.

The whole while, phthalates can be leaching into the meat...

What are the health problems with phthalates anyhow? 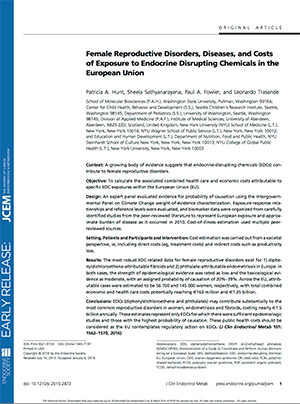 The JCEM study consisted of an expert panel who evaluated evidence for probability of causation.  They used something called "weight-of-evidence characterization".  This meant they looked at studies linking exposure to biomarkers measuring the amount of the chemicals in blood and urine. They concluded that EDCs may contribute substantially to the most common reproductive disorders in women, endometriosis and fibroids, costing nearly €1.5 billion annually.

According to the must read series, Take Care Guide:

The idea is that it appears phthalates are viewed in the body as a hormone and disrupt the entire way that your body manages itself. These may by really dangerous chemicals even in very small quantities.

This newest study shows how there could be a significant financial impact in continuing to allow these hidden chemicals in things like meat packaging, cosmetics, soaps / hand lotions and even paper receipts.

So, why are they STILL being used?

That depends who you ask. The reality is that some food companies have been actively working to stop using them. Phthalates used to be more widespread in the food industry, but many companies have started to phase them out because of the health concerns.

Really big companies have even tried to be 100% phthalate free.  But it seems to be harder for them with their meat products. After all, it is very convenient and appealing to have the ability to flush meat with carbon monoxide so it looks 'fresh' for a long time on the shelf.

As a personal aside: When reporting on science articles and emerging topics, you end up having to use all sorts of phrases like, "growing body of evidence supports" and "evidence linking this is rapidly emerging". It can be a little awkward to write. And probably to read, too.

I would love to just use plain talk and say "causes" but the truth is, we just can't 100% prove something like this in the current regulatory environment (at least without massive financial investment that nobody is required to make). These chemicals are allowed to be used without the testing required to know for sure if they are safe. It is an age old question of 'progress' vs 'safety'.

Would companies develop any new materials if they had to test them for 20 years in controlled studies first? It seems these chemicals can cross the placenta barrier and have impacts on developing babies 3-80 years later -- is it ethical to conduct a study purposefully to prove safety there?

Somehow it is viewed as ethical or at least acceptable to instead expose everyone to these chemicals in a mix and combination of which has never been tested before. The stuff you should know podcast I also linked above says that the average women is exposed to 400 potentially toxic chemicals every day and absorbs FIVE POUNDS of these chemicals each year! There has never been a study to show safety with a mix like that.... yet that is the reality for the 'average' woman and her unborn children.

So yes, one could make the case that the science isn't 100% conclusive yet and that is a valid point. However,  I feel nobody will ever be able to study the massive interaction of chemicals our bodies are forced to reckon with in order to prove anything to 100% certainty.

Murky as science is, over time the answers become clearer and clearer. More targeted studies are being done all the time. And a pattern IS emerging. But it's also important to talk about it the right way.

In the meantime, because of our commitment to 'no shortcuts', it is clear that there is MORE than enough evidence for us to say, "Thanks, but no thanks." Our (and your) family's health isn't worth any sort of gamble.